Our team, called the Épicuriens, had a great time at the Paris Android Dev Camp 2012. And we were even happier because we finished 2nd out of 11 teams, and ended up winning Android tablets for each team member!

The Paris event was part of the Global Android Dev Camp, which took place in in 88 different cities on the same weekend. Every continent was represented except Antartica!

Each team had less than 48 hours to create a complete Android App, and in Paris we had an extra requirement that the App be based on an Open Data Set.

And one interaction designer

Since all the team members like wine (in France who doesn’t), we decided to use the Appelation Origine Controlée data set published by the French government. Believe it or not, out of 36 000 towns in France 22 000 belong to AOCs! We did restrict our App to only the wine AOCs, which did bring the number down a bit.

At the end of the weekend using our “AOC France” App, users could easily find wine producers in the different wine French wine producing areas. proto map navigation, location based notifications, an augmented reality view, and even a good old drill down list navigation.

Here are some screenshots from our App. 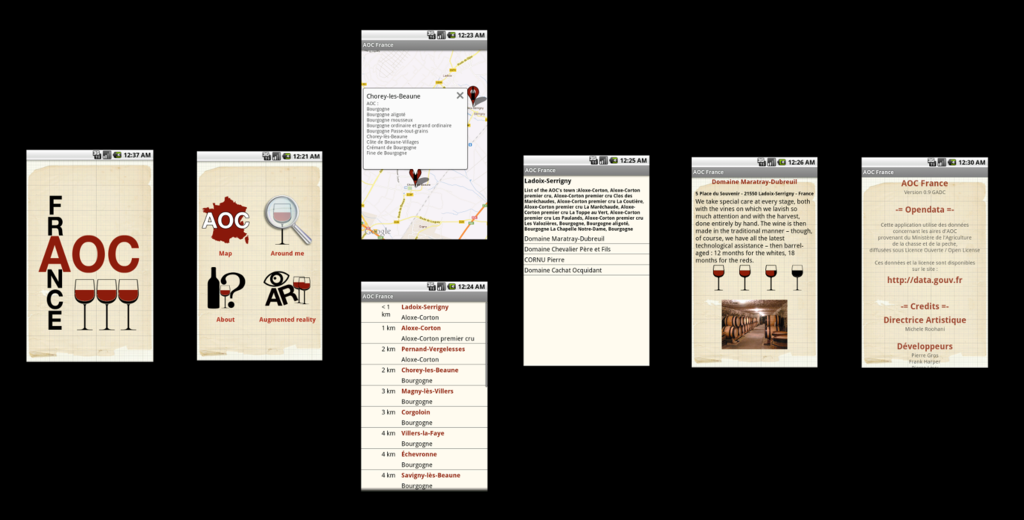 The whole event was very well organized thanks to the Paris Android User Group. They even shot a few videos of us during the weekend.

One thought on “Second place at Paris Android Dev Camp 2012”